It’s National Squirrel Appreciation Day (NSAD) and baby squirrels are one of the best creatures on this planet. They are tiny, cute, and don’t have the upper teeth needed to bite (unlike their adult counterparts). To celebrate all the squirrels in the world, I’m going to tell you a story about just one; one tiny squirrel that stole my heart.

It was summer and in the 90’s. I received a call from our clinic regarding a possible orphaned Western Gray Squirrel which had been seen earlier that morning in downtown Corvallis. Given a general location, I got in my car and went to check it out. It had already been several hours since the last sighting, so I didn’t have high hopes. Wild animals have a habit of wandering off and not staying in the same place for very long.

When I got to the location, I began looking around. Over the phone I had been told the person who called had left bread on their porch for the squirrel before they went to work. When I found it, some nibbles had been taken but there was no squirrel in sight. I checked the area; looking in every crack and crevice I could find. Noticing the neighbors were home, I began to walk that direction. Maybe I could ask them if they’ve seen any baby squirrels. Then I saw her and my heart sunk.

“Orphaned baby squirrels are surprisingly trusting. Bobcat kittens, fox kits, or any other baby wild animal would rather take a bite of you than let you help them. But not baby squirrels.”

She was about 10 feet down the driveway. At first she looked like a clump of fur or a funny shaped rock lying there is in the sun. As I drew closer, however, I saw the shape of her frail body stretched out. Flies hovered around and crawled on her side. She was gone, I was sure of it.

Thankfully, I was wrong. As I approached, she lifted her tiny head slowly to look at me. At first it seemed like she wanted to run, but couldn’t. I got onto my knees next to her and talked in a soothing voice. Orphaned baby squirrels are surprisingly trusting. Bobcat kittens, fox kits, or any other baby wild animal would rather take a bite of you than let you help them. But not baby squirrels. I’ve heard stories of them following people to their cars, desperate in their attempts to find someone to take care of them. This kiddo was no different. I wrapped her in a towel and carried her to the box that I had stuffed with soft fleeces and a plush toy just for her. She was very weak, but thankful to be out of the hot sun.

When we arrived at the clinic, I performed her initial exam. There was nothing to her; just bones and fur. Fly eggs were embedded in her soft gray fur. She was about 5 weeks old and showed the typical signs of being orphaned; dehydration and emaciation. Luckily, those are easy to fix. She was given warm fluids to re-hydrate her, squirrel milk formula to fill her empty belly, and a flea combing to remove the eggs. However, she showed signs of another ailment that was much more severe. Mange.

It shows on their ears first. Little bumps that are very itchy.

Then it moves down the face and eventually over the rest of their body; hardening the skin and causing hair loss. It is caused by mites which burrow underneath the skin and drink the bodily fluids. Mange is often fatal if not treated. The number of Western Gray Squirrels we’ve seen from the Corvallis area showing signs of mange has greatly increased in the past few years.

Luckily, for this squirrel, she was treated just in time. I got to watch her transform from the small, weak, starved infant I found that 90-degree day to a healthy, willful juvenile. After she was cleared of mange, she was moved to our outside squirrel cage with two other Western Grays her age. For the next few weeks they’d bond together, learn how to forage, and finally become the squirrels they were meant to be. Thanks to the individual who reported her to us, the dedication from our staff and volunteers, and support from the community, we were able to return her and her knew adopted siblings back to the wild. 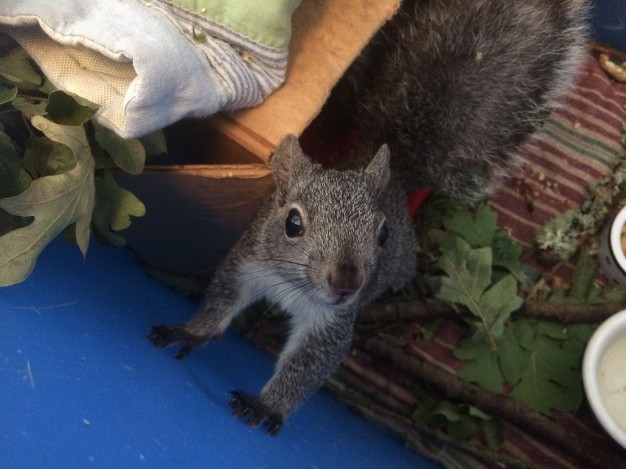 To help ensure we can continue to help baby animals just like this squirrel, please consider donating to our center. Last year alone, we treated 1,500 patients. Squirrels, owls, foxes, eagles, and so many others that, without the support of the community, would have never gotten their second chance. Donate today and the next time you see a Western Gray Squirrel busily foraging in the trees, who knows, that squirrel may be one you helped to save.

To donate, go to http://chintiminiwildlife.org/giving-opportunities.htm

For the first time in thirty years, we are operating without our volunteers. We are purposefully working with minimum staffing in an effort to slow the spread of COVID-19 in our community. While we dearly miss our volunteers, we know it’s best to “Stay Home, Stay Healthy.” If you haven’t already seen the various aquarium/zoo videos circulating, you SHOULD. Without visitors, penguins, puppies, and more are having fun wandering and exploring new areas. And we think it’s pretty cute 🥰 We made a little video of our own, with two male Mallards who were getting a little exercise while wandering around the wildlife hospital this afternoon. We miss you, volunteers!
Two days ago we admitted four orphaned raccoons after their mother was found deceased. They are very young, as most of them have their umbilical cords still attached to them. All are in good condition and are being syringe-fed around the clock by our animal care staff. The needs of wildlife remain constant, even during times of world health or economic crises. We will continue to meet the needs of wildlife as best as we can while ensuring that our organization remains strong and functional, even once the pandemic has passed. To that, we'd like to sincerely thank the finders of the young raccoons for donating $100 toward their care. #cwc #chintiminiwildlifecenter #oregon #orphan #babymammal #raccoon #raccoonkit #rehab #wildliferehab #wildliferehabilitation #pnw
We are excited to share the news about yesterday's patient release! Back in October we admitted a subadult Red-tailed Hawk after he had been struck by a vehicle. He sustained two fracture sites on his left leg, which required surgery and an extensive, lengthy recovery. Many of you donated funds to aid in the cost of his longterm care: your donations totaled $700 during his time with us! The Red-tailed Hawk made a complete recovery and is now flying free again. We'd like to thank our staff veterinarian, Dr. Claire Peterson (who had the honor of releasing the hawk yesterday!) for performing the successful surgery, animal care staff for providing wonderful care during his most critical moments, and everyone else who took part in his remarkable recovery!
Our most recent e-news includes an update from our Executive Director and some simple, no-cost tips for helping wildlife during the COVID-19 pandemic. Check out our Facebook page for more information 👏🏻
Follow Chintimini Wildlife Center Blog on WordPress.com
%d bloggers like this: