Last year alone, we treated approximately 1,500 patients in our clinic; a new record. It might have been hard to choose, but here are some of our staff and volunteers’ favorites. From eagles to otters, we hope you enjoy these stories from behind the scenes at the Chintimini Wildlife Center as you celebrate the coming of the New Year!

This November marked my one year of volunteering at Chintimini Wildlife Center’s Rehabilitation Clinic. Every week since I began, there have been multiple “firsts,” which can’t be said for many organizations. Whether it’s the first time seeing a tiny saw whet owl or a bobcat, or the first time waterproofing the murres, each week I come home with another exciting story. It’s difficult to pick my “favorite” patient of 2015, but one specific animal stands out immediately in my mind.

One week during the Fall we had about five different owl species in the ICU. It was one of these patients, a Great Horned Owl, who made an unforgettable impact on me. She was admitted after being hit by a car and had neurological damage which left her blind. Because of this, she needed to be hand fed until her vision returned. Up close, Great Horned Owls are very large birds, with huge talons and very intimidating beaks. I tried a few times to feed her, and although she wasn’t aggressive, my fear was holding me back.

One Saturday evening, I agreed to cover as shift leader, which meant it was my responsibility to feed the Great Horned Owl. As our Animal Care Director advised, I had to “own it,” and I did. She ate each and every last bite and seemed to enjoy her meal greatly. The confidence this task built in me was invaluable and I will never lose the memory of this evening or this wonderful creature.

Sadly, this patient never recovered her vision and could not be released back into the wild. Her quality of life would have suffered with this impairment in captivity so she was humanely euthanized. During her short stay at Chintimini, she made me and many other volunteers better at wildlife rehabilitation. And even though feeding birds of prey is still a bit scary, I just think back to this Great Horned Owl, take a deep breath, put my fears aside and get it done.

This Otter Be Good

They brought him to us in a red cooler. It was all they had with them in their car when they found him. The lady and her husband had spotted the little River Otter struggling to walk along the side of the highway. Every few steps, he would collapse.

When they called, I was skeptical. In my five years working and volunteering at Chintimini Wildlife Center I had only seen River Otters there once before. People often misidentify the species when bringing a patient to us and I figured this was the case when I heard an Otter pup was on its way to our clinic.

So I was surprised when I saw him crying in the red cooler. During his initial exam I found he was underweight and dehydrated, a clear sign that he had been on his own for several days. His feet were rubbed raw from walking on the hot pavement. He was so exhausted that he fell asleep in my hands as I was giving him the exam.

Due to the complexity of his social needs, he was not eligible for release. So we searched for an acceptable facility to place him. In the meantime, I became his primary caretaker and nicknamed him Charlie. Taking care of that little otter pup and watching him recover from his injuries was one of the most rewarding moments I’ve had at the center. He now lives at the Oregon Zoo with two other otters (one with a similar story) and I can’t wait to visit him again.

As a volunteer for over three years at Chintimini Wildlife Center and an avid wildlife enthusiast, the opportunity to work with our local wildlife is one I wouldn’t trade for the world. Though every patient I work with holds a place in my heart, the most memorable of this year was an exciting first: a stunning male Bald Eagle.

Just about everyone knows lead poisoning can be fatal, and its use in paints and other products has been banned for many years. Unfortunately, it’s all too common for birds of prey, particularly scavengers like eagles, to come in contact with lead, often as a result of feeding on the contaminated gut piles. Such was the case for this patient, who quite literally fell from the sky one afternoon in Crabtree, Oregon.

It took a month of intensive care treatment to get this guy back on his feet, but luckily, he was a trooper, and we were able to release him this summer.  Even more so than other patients, I recall actively checking up on his progress, growing ever hopeful with each day — lead poisoning is so often a death sentence, and as this was the first Bald Eagle I had ever handled and actively worked with, I was particularly attached to this patient. I remember cheering when I heard he was standing on his own, and I was absolutely overjoyed the day he was released.

Now there’s a memory that will last a lifetime.

It’s Good to Have Gulls.

Gulls have always been one of my favorite species to work with due to their feisty temperaments and fighting spirit.  Ever since I started working at Chintimini Wildlife Center five years ago, it was my dream to work with a gull chick.  This July, I admitted one of the only baby gulls in Chintimini’s history and I was immediately in love.  He was tiny, fluffy, covered in spots, and very hungry.  Shortly after, we received two slightly older gull chicks for him to be friends with.   It was my dream come true.  Three baby gulls!

Over the next few months, I made sure the three growing gulls had very enriched lives including specially prepared diets and enclosures.  I think I had the most fun picking out toys for them.  They loved anything shiny or that made noise.  I could watch them play for hours, at a distance of course.

Unfortunately however, after several weeks in our care, it became clear that the first (and my favorite) chick was human-imprinted.  He was less than a week old when he was admitted and was held by a member of the public for several days beforehand.  When very young animals are held by the public and improperly handled and cared for, human-imprinting can occur.  This results in an animal that wants to associate with people and is unable to recognize itself as a member of its own species, which is a death sentence in the wild.  Once he came into our care, we did everything right, but we could not undo the damage that had already been done. 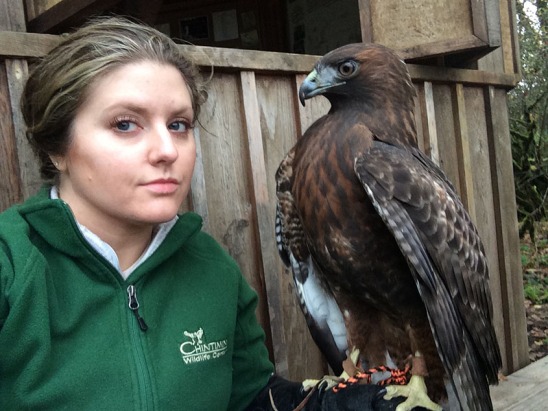 Since I was a little girl, raptors have always fascinated me. From owls to eagles, vultures to hawks, I’ve wanted to learn everything about them. Which is why I was thrilled to join the raptor education program at Chintimini two years ago. After a few weeks of cleaning cages and learning safety protocols, I was finally approved to hold a Turkey Vulture. Now, I train with 14 birds of prey in our Raptor Conservation Program and help to educate the public on wildlife conservation issues.

Two months ago, I was given the opportunity to train a female Red-tailed Hawk that was admitted to the clinic earlier in the year, #15-0202. She was underweight, dehydrated and showed signs of weakness on her left side. In order to evaluate her eligibility to be released back to the wild, I began hand feeding her and training her to step up on my bird-handling glove. Two months later, she is gaining muscle and strength by flying to my glove for exercise and will be soon be assessed for release. I hope the new year brings new freedom to Red-tailed Hawk #15-0202.

One thought on “Wildlife Stories from 2015”

For the first time in thirty years, we are operating without our volunteers. We are purposefully working with minimum staffing in an effort to slow the spread of COVID-19 in our community. While we dearly miss our volunteers, we know it’s best to “Stay Home, Stay Healthy.” If you haven’t already seen the various aquarium/zoo videos circulating, you SHOULD. Without visitors, penguins, puppies, and more are having fun wandering and exploring new areas. And we think it’s pretty cute 🥰 We made a little video of our own, with two male Mallards who were getting a little exercise while wandering around the wildlife hospital this afternoon. We miss you, volunteers!
Two days ago we admitted four orphaned raccoons after their mother was found deceased. They are very young, as most of them have their umbilical cords still attached to them. All are in good condition and are being syringe-fed around the clock by our animal care staff. The needs of wildlife remain constant, even during times of world health or economic crises. We will continue to meet the needs of wildlife as best as we can while ensuring that our organization remains strong and functional, even once the pandemic has passed. To that, we'd like to sincerely thank the finders of the young raccoons for donating $100 toward their care. #cwc #chintiminiwildlifecenter #oregon #orphan #babymammal #raccoon #raccoonkit #rehab #wildliferehab #wildliferehabilitation #pnw
We are excited to share the news about yesterday's patient release! Back in October we admitted a subadult Red-tailed Hawk after he had been struck by a vehicle. He sustained two fracture sites on his left leg, which required surgery and an extensive, lengthy recovery. Many of you donated funds to aid in the cost of his longterm care: your donations totaled $700 during his time with us! The Red-tailed Hawk made a complete recovery and is now flying free again. We'd like to thank our staff veterinarian, Dr. Claire Peterson (who had the honor of releasing the hawk yesterday!) for performing the successful surgery, animal care staff for providing wonderful care during his most critical moments, and everyone else who took part in his remarkable recovery!
Our most recent e-news includes an update from our Executive Director and some simple, no-cost tips for helping wildlife during the COVID-19 pandemic. Check out our Facebook page for more information 👏🏻
Follow Chintimini Wildlife Center Blog on WordPress.com
%d bloggers like this: